Women in Comics: Musings of a Grumpy Lesbian Comic Book Nerd / Are Marvel and DC Good for Young Female Audiences? 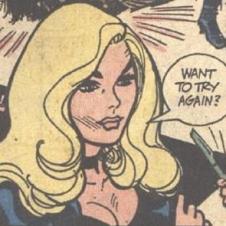 ISLAY
Twitter
The fact that Marvel and DC are, at last, acknowledging the existence of their female audience is a refreshing change for me, given that I’ve been reading comics since I was twelve but never once felt that I was actually being considered by either of the big two as an audience member until a few years ago. With exceptions from occasional individual creators like Gail Simone (hallowed be her name), the overall impression I had from both publishers on a wider level was that if I was ever considered as a consumer of Marvel and DC’s output, it was with scorn by higher ups at both companies and hostility from the men who worked in the comic book shops I went into.

By the time I was about sixteen I had stopped buying monthly issues all together and instead picked up graphic novels from indie publishers and bought second hand trade paperbacks of seminal Marvel and DC titles off Amazon, so that I no longer had to brave the comic book shops. It was only in my early twenties that I began picking up new titles again after a friend thrust the first issue of Kelly Sue DeConnick’s Captain Marvel into my hands, and seeing Carol Danvers out of that dratted swimsuit seemed to me a flashing neon sign that something at Marvel, at least, had shifted. After I moved to London from Edinburgh, I found a new comic book shop – Orbital – staffed by at least as many women as men, set up a new pull and never looked back.

For the most part, I was right that Marvel and DC were shifting gears with their approaches to a female audience. With the advent of the Marvel Cinematic Universe, and DC’s limping attempts to compete onscreen, both the big two have noticed that there is, in fact, a female audience for superhero stories – whether they’re teenage girls at home writing slash fic about Tom Hiddleston’s Loki, or grumpy twenty six year old lesbians like myself who just really, really want Oracle and Black Canary to get together, please.

But has this shift been wholly good for female readers and the industry? (Spoiler alert, guys, I’m gonna argue that basically yes, yes it has – despite bumbling miss-steps from both publishers and some seeping sexist grossness behind the scenes).

First: Less overt sexualisation of female characters, at least in books trying to get a young female audience. I grew up with Gail Simone’s run of Birds of Prey, which was absolutely formative for me – but I constantly had to overlook the way the characters were drawn and the impractical, soft-core-porn style costumes that those characters would never have chosen to dress in. Now there are multiple books where the female characters are covered from neck to toe and aren’t drawn only to accentuate their disproportional boob balloons, and it’s delightful, guys.

This seems to have been either accompanied by or precipitated by (chicken and egg, really) a tidal change in the way readers receive inappropriately drawn female characters. It’s noticeable now that when a character IS grossly, overtly sexualised or otherwise drawn offensively it gets push-back, that, amazingly, creative teams listen to. See: that super gross killing joke variant Batgirl cover from a while back, that drew so much ire it had to be yanked before it ever hit the stands, and that awful Milo Manara Spider-Woman variant cover that did make it to publishing (UUUGH) but launched a storm of think-pieces both from within and outside the industry. It’s hard to imagine that kind of cover drawing that kind of controversy back when Helena Bertinelli was still running round Gotham in midrif baring spandex and hot pants.
The fact that creative teams at the big two actually give a damn about what their female audience members think because they’ve realised that WE SPEND MONEY ON COMICS TOO is amazing to me and it’s really only happened in the last five years or so. I mean, this is how Starfire was being born in 2011, guys:
And the bottom line is, where DC and Marvel lead, everyone else basically still follows – the fact that they’ve started catering to women a lot more means we’ve also seen smaller indie presses and obvs Image also pushing titles for and about women (from Lumberjanes to Papergirls).

Secondly: It’s an expanded customer base. Catering only to a specific demographic of male fans is demonstrably bad for Marvel and DC as publishers. I’ll use DC’s disasterous New 52 relaunch in 2011, designed to attract twenty something male readers, as an example, but this is a pattern that the numbers make clear across both publishers.
In July of 2011, before any of the New 52 material launched, DC’s comic book sales did $6.74 million. In January of 2015, after four years of New 52 material, those sales were at $6.6 million. Not only is this a clear drop, but it’s actually worse than it looks, because during this time the comic book industry as a whole had grown. In July 2011, the top 300 selling comics made $20.29 million. By January 2015, that number had gone up to $26.87 million.
So not only had DC’s profits shrunk in that time, but so had their market share – new readers were coming into comics, they just didn’t like anything DC had to offer.

It’s hard to find concrete figures to suggest how DC is doing now – though reports of financial trouble continue – it’s hard to argue with the fact that N52’s ‘edgy’ tone was bad for DC. As the DC titles got darker and more violent and female characters died more often and became more and more sexualised… their sales dropped, and dropped, and dropped.

So yes, it’s an important, necessary and good thing that DC and Marvel are trying to attract teenage girls – it broadens the selection of material on offer by both publishers and it makes the medium accessible to a wider range of people. And the more people buying DC and Marvel the more people are also likely to start looking into indie publishers and buying titles there and the more money comes in to expand the industry further.

Most importantly, with an increased awareness of how vital women readers are for profits, broader culture changes within both publishers can be facilitated. The thing is, culture changes behind the scenes at both companies are slow coming – where both publishers have great progressive creators on the ground, from G Willow Wilson to Marguerite Bennett, at the top end both seem to be bro-y, misogynist cess pits. Marvel Comics’ CEO Ike Perlmutter donated $1 million to a Trump Fundraiser back in January (UGH. UUUUGH.). DC just ‘restructured’ Vertigo and got rid of Vice President and Executive Editor Shelly Bond, one of if not the most senior female employee for no clear reason whatsoever, whilst continuing to protect Eddie Berganza, a senior DC editor who reportedly has multiple counts of sexual harassment on his HR record.
Berganza’s survival and the icky bros-before-those-whiney-hoes culture it heavily implies exists in the DC offices is troubling to me as a woman who spends regular money on DC Comics – but the very fact that Berganza has finally been publically named and shamed by other industry professionals after years of rumours, is indicative of hope for change on the horizon. Though Berganza, for now, remains firmly entrenched in the DC offices, like some creepy toxic mould, the upsurge in the visibility of female readers has forced more senior editors to place greater value on women as customers which in turn might just about be fostering a culture where women have to be thought of as human beings. And as that novel concept percolates, we can hope that that facilitates the boosting of voices calling out Berganza and other predators in both publishers, forcing change that will create friendly environments for more female creators and editors to lend their talents to sustained high quality output for female readers.