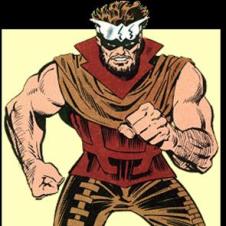 Imagine my excitement when I discovered that my favourite ‘underground comix’ artist Robert Crumb had illustrated the work of my favourite fantasy writer Franz Kafka.   Since joining the Graphic Novel Reading Group at Brompton Library, it has occurred to me more than once just how suitable certain prose works would be for adaptation to the graphic novel form.  Now, here was a test.

Strictly speaking, Kafka by Robert Crumb and David Zane Mairowitz (2007) is not a prose novel done in the graphic novel form.  It’s one of those Beginners or Introduction books that use text and cartoons to introduce a thinker, artist or ideas, like Marx for Beginners,  Introducing Evolution or a Beginner’s Guide to Jazz.

An example like Introducing Camus (Icon) – also with text by Zane Mairowitz – is practically the whole life and work of the French writer done in panel strip form.  Crumb’s Kafka is in that league.

For much of Kafka, Crumb shares the page with Mairowitz’s biographical text, supplying images for Kafka’s life and circumstances, but Crumb also adapts two whole short stories.  With these adaptations there are losses and gains, like movie versions, but just like movies,  you have to decide whether the adaptation has got more things right than wrong.  For example, the Tobey Maguire Spider-Man had forty-odd years of Spidey comics to digest but gets it 70 % right just by keeping Peter Parker a nerd and that troublesome J. Jonah Jameson in the plot.

Perhaps the best things in Crumb’s Kafka are those two short stories Metamorphosis  and In the Penal Colony. 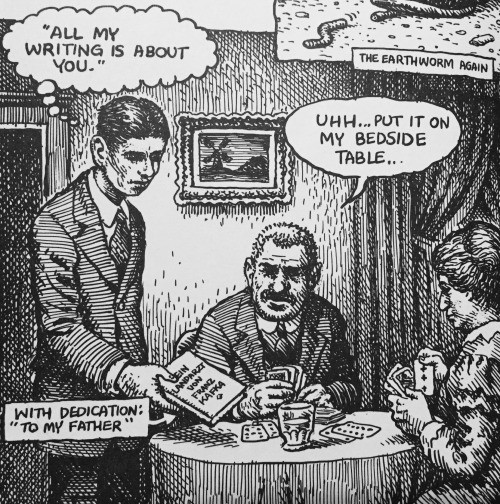 Of course, adaptation is one of the least fashionable things for a sequential artist to do. In cinema and TV it’s common practice, but why bother in the graphic form when there’s so much original memoir and grand fantasy to be getting on with?

Crumb’s style however seems ideal for a Kafka strip. In his early work (1967 – 70s), his dark cross-hatching lent itself to mucky city streets and unfancy home layouts. His characters were no supermen but often fools and fraudsters, dazed or predatory, in small-scale nightmares full of misanthropy and misogyny, caricature, self-hatred and satire on the meaning of life. One might even say he made a speciality in satirizing lust. 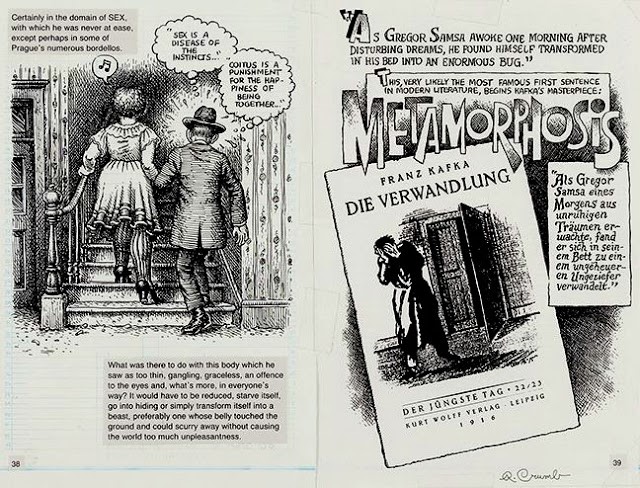 Metamorphosis is the story that begins with Gregor Samsa waking up one work day to find that during the night he’s turned into a monstrous bug.  The German that Kafka uses to define what Gregor turns into is ungeheures Ungeziefer. In German ungeheures means ‘immense’ or ’giant’ and Ungeziefer the unspecified ‘vermin’.  However, a friend of mine said her Austrian sister told her that the latter word could be taken as ‘creepy-crawly’.  (Can you imagine Kafka as a kid’s bedtime story? “Little Greg woke up one morning and found that he had turned into a huge creepy-crawly…”)

Other translators have used the word ‘insect’, or, even more specifically, ‘cockroach’. Crumb portrays it as closer to a beetle.  Gregor wakes and finds himself on his scaly back possessing more legs than he went to bed with. So, of course, he tries to get up and go to the office.

You may have heard people refer to situations as “Kafkaesque”, especially when having difficulties with the local bureaucracy or data surveillance.  They usually just mean to evoke a situation of persecution by mysterious powers.  Kafka’s prose however presents a fuller picture: in his texts the persecuting power may be mysterious, but the victims often abase themselves before it. They go along with things as if they were ‘normal’ and unchallengeable, however injurious to themselves. Whether it be a clerk who wakes up as a beetle but tries to relate to his family and his employer as if nothing had happened or a dog who reports on the lives of his fellow canines without once mentioning that they have pet owners.  (Like telling the history of Britain without mentioning its wealth from Empire slave plantations.)  As a young Jew, Kafka knew how inexplicable the workings of an outside power could be but he was also aware of the internal problem of abasement before the Daddy.  His fraught relationship with his own father Hermann helped him focus on how a victim can submit to ways of thinking that inhibit their freedom. When the ghetto of Prague lost its walls, members of the Jewish community put up fences: As Kafka’s text says: “in our abjection is our protection.”  Kafka’s stories explore how the humiliated can be mentally in thrall to subordination.

Crumb’s strip story shows us the adventures of the bug in the family home on the morning of the change.  We hear some of Gregor’s point of view but we mainly see the trouble he gets into. The reality of the hard-shelled animal is ever present while the prose version gives you mainly the mind of Gregor, his psychology in not accepting the situation fully.

Kafka’s text is an SF tale which gives you what some critics have always asked of the genre – fantasy with an interest in character.  Kafka’s prose focuses on the mind of victims not the actions of the persecutor. The one exception to this writer’s introspective quality could be said to be his story In the Penal Colony, which is what makes it such a superb material for adaptation to the graphic form. 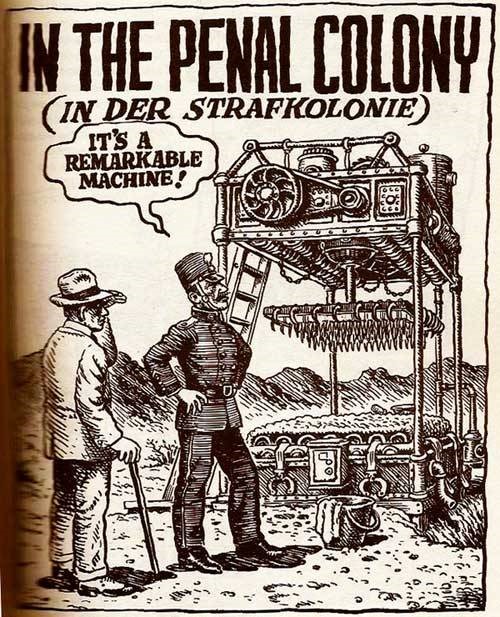 Crumb’s In the Penal Colony is his most effective graphic realisation of Kafka. The story concerns an island prison located in a hot country where a European power is still in direct control. A traveler (an explorer or journalist) comes to watch the demonstration of a large machine, ‘the harrow machine’, that enacts a sentence on a prisoner. Literally, it uses an elaborate writing mechanism to carve out on a prisoner’s naked back the description of their crime and the punishment.

I would offer one reason why this story works so well in the strip panel form. In the prose story, the harrow machine is elaborately described but it’s hard to get a grip on visualising it as the narrative action continues. But illustrated by Crumb on the page it need not be referred to again, so that the reader can concentrate on the interaction of the characters with it and each other. This permits the action of the story to be much clearer as it develops, right up to and including the last panel showing the face of the officer-in-charge. Some might say it’s missing some important details of the prose version but it allows the strip to concentrate our attention on the characters – mainly the visiting traveller and the officer, the latter being the one who consents to be the torturer and the tortured.

In both his adaptations Crumb’s scratchy drawing style is less cartoony than his early ‘underground comix’, a style that Scott McCloud would call closer to ‘realism’, like a Modesty Blaise newspaper strip rather than simple ‘iconic forms’ like Charlie Brown.  Somewhat like Kafka, Crumb’s early comix work showed a particular interest in masochism, degradation (sometimes of himself) and warnings about being taken in by your own gullibility.  His first underground press strips often feature young street people taken in by fraudsters offering enlightenment and sexual emancipation but to their own advantage not the kids. In those days, Crumb’s most famous character was Mr Natural, a rather ambiguous guru figure with long beard and often a long robe who might give you good advice one minute and the brush-off the next. 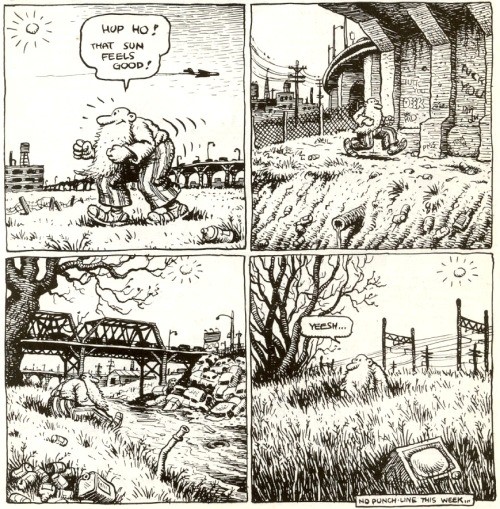 There are lots more prose works that could work as graphic novels. For example, the future-adventure novel After London by Richard Jefferies (1883) or Philip K, Dick’s shorts.  PKD’s tales have recently been adapted for TV of course, in Electric Dreams, but many of those didn’t bear much resemblance to the actual prose narratives, maybe because the originals are so radical. (Check out the original prose The Hood Maker.) Someone in graphics should have a go at intelligent genre works like those of Patricia Highsmith or Ursula K. Le Guin, the fiction of New Weird or the lively literary realism of a book like The Kite Runner. The GN version of such work need not be parasitic or a replacement but complementary to the original prose, like a modern dress production of Macbeth or the TV version of a superhero.  It might also help the graphic novel acquire some more sophisticated characterisation and storytelling.

It’s fine with me that the GN world is so full of original and personal material, from memoir to fantasy: it’s a wonderful riposte to the safety-first culture of remakes and sequels you get elsewhere. I’d just like to see some more prose narratives ‘translated’. 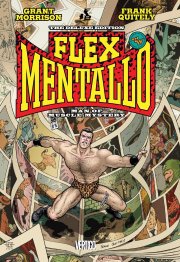 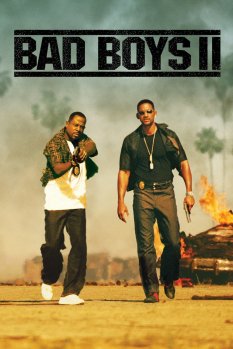 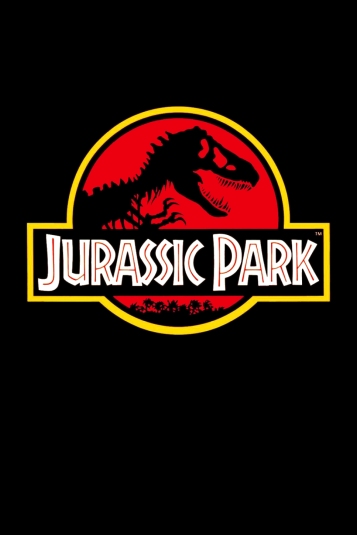