The Gap between Panels / Avatar Press and Horrific Horror

In an interview promoting his Avatar Press miniseries Blackgas, Warren Ellis highlights some of the difficulties of trying to create an effective horror comic:

It’s hard to do the sharp-shock of horror in comics, but it is possible to create a real miasma of disturbingness (which may not be a word). Bit by bit, you can worm your way into a reader’s head and, not outright scare them, but disturb them… create genuine revulsion, so that they feel like they need a shower afterwards.

The reason why sharp-shock horror is tricky in comics is that the creator has less control over pacing. Filmmakers can dictate what the viewer sees and hears a great deal, and so can build moments of tension and release whenever and however they want. In comics the major unit of tension-building and reveal is the page-turn, which happens at regular two-page intervals, and you somehow have to fit the story around these rigid units.

So you can understand why rather than relying on this single method of creating chills, which will very quickly become obvious and boring to the reader, creators settle for being gruesome and disturbing instead. Blackgas is a case in point – a zombie comic in which the zombies retain the capabilities of regular people, but have their inhibitions stripped and their aggressiveness amplified. It’s an idea that Garth Ennis and Jacen Burrows took on in their more popular and infamous Avatar series Crossed.

Ellis uses the idea to explore the irony of fighting fire with fire. When the zombies are blown up with grenades, the ‘pink mist’ caused by the explosions does the opposite of contain the threat – bombs just make more zombies. Ennis and Burrows go in a different direction, choosing not to explain the origin of the zombies. Instead, by putting crosses on their faces, the zombies acquire a metaphysical dimension. The world is a cruel and brutal place, it surely cannot be the work of a benevolent creator. Ennis’s breakout hit Preacher established his taste for blasphemy. Arguably Crossed is just a more nihilistic encapsulation of the same concerns.

Both these titles came out on Avatar Press. In the mid 2000s the publisher offered big names in the business the option of putting out creator-owned books with no content restrictions whatsoever. Many jumped at the chance, and many used the opportunity to create this particular kind of grim, gruesome horror – the sort that seems particularly suited to comics.

I read two further examples from their stable this week. Caliban is also written by Garth Ennis, with artwork by Facundo Percio, and is obviously inspired by Ridley Scott’s Alien. Although there are some effective moments of body horror, it steps back from the abyss of Crossed, and in some respects majors on the sharp-shock horror Ellis found so difficult to do in comics. The concerns of Crossed peek through nonetheless. The alien represents a kind of insatiable rapacity towards oblivion that is almost impossible to counter – a kind of cancer of the universe. And like Crossed, the book is a sort of love story about resilience and sacrifice – of connections made in inhospitable circumstances. 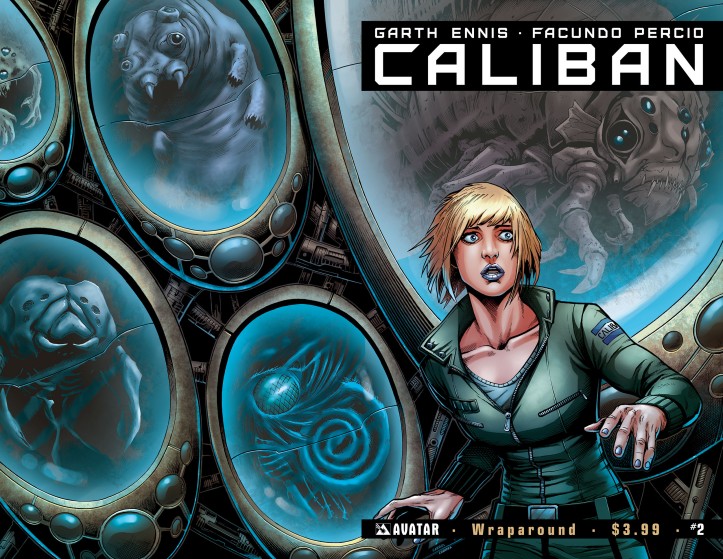 Caligula is much more in in the Crossed vein when it comes to the style of horror within. The writer David Lapham has written books in the Crossed series and is obviously at home spinning tales of violent debauchery. As befits the decadent Roman setting, the artwork is fully painted by German Nobile, although it retains the focus on facial expression which seems to be an Avatar hallmark. A bit like Lapham’s brilliant Young Liars, the book is about a man sucked into an absurd, perverted and dangerous world, in thrall to a charismatic but psychopathic idol. Through such characters Lapham lures in his readers, until they find they’ve bitten off more than they can chew.

I learned to my surprise that prior to this 2000s shift into horrific horror, Avatar was notable for publishing ‘bad girl’ comics: a unsavoury trend in the 1990s for femme fatale characters in revealing outfits – of which Top Cow’s Witchblade is probably the most well-known example. Much of this stuff was seedy and exploitative, but it’s nonetheless interesting that when Avatar turned from sex to violence its reputation increased. That’s partly down to the thoughtfulness of the creators, who took responsibility for the violence (including sexual violence) they were putting into their comics. The horror had a disturbing edge, but it served a purpose. It wasn’t there for its own sake, unlike the cheesecake in ‘bad girl’ comics.

But perhaps it also goes to show that violence is still a safer subject than sex. It’s easier to be serious about, and also perhaps easier to avoid the trap whereby depicting it suggests you endorse it. Given free reign, creators (with some honorable if foolhardy exceptions like Alan Moore) still shy away from this other big area of censorship in the arts.